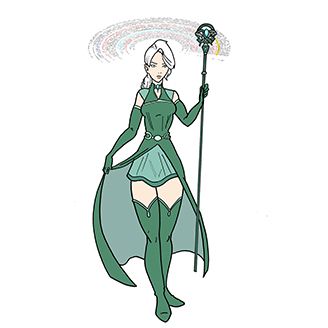 Where the Omniverse begins, Necroshard Hordes swarm to meet the Emerald Guard of the Faelerin Sovereignty. Where the stars are oldest, the Mecha Legions and Sapphire Marines of the Lanthorian Federation hold the line against Meldanian Imperial forces led by infernally-enhanced Doom Wardens. This is the Ardoran Cluster, where all things are possible – and everything is on the line. Master one of the Facets – powers of magic, spirit, technical wizardry, physical prowess, and more – to take on the various enemies that seek to dominate the Cluster for their own ends. Or rely on your own natural gifts and whatever gear you can grab to stand with the Defiance in the greatest adventure in the galaxy.

Shard Warriors is epic, over-the-top space opera mixed with science fantasy. Elements of Star Wars, Babylon 5, Robotech, and Starblazers influence the setting, yet you’ll find Flash Gordon, Legend of Korra, and even a little Avengers: Infinity Gauntlet/Endgame here. You’re playing heroes in the Defiance, working to hold back the Meldanian Empire, the Necroshard Hordes, and the other forces that threaten the Ardoran Cluster. Along the way, you may discover some of the ancient mysteries of the Omniverse itself! Sean is the co-designer of the system and is happy to teach the rules (which include some unique setting-specific options). Chat-Play up to Extensive is available, and multiple Seasons are possible. Number of players is negotiable.