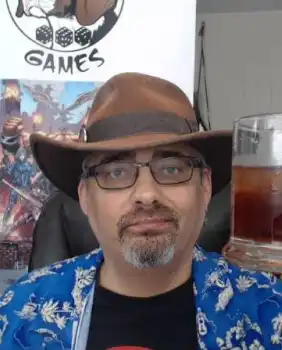 He was the Events Coordinator for GAMA (helping run both Origins and GAMA Trade Show), and chronicled the entire roleplaying game hobby and industry in The Fantasy Roleplaying Gamer's Bible, which sold over 10,000 copies. He worked for DriveThruRPG and RPGNow as the Marketing and Communications Director; during that period, he helped coordinate massive charity and relief efforts for folks like Doctors Without Borders and Feeding America, leveraging the RPG community's generosity.

Sean worked directly with Pinnacle and Palladium Books to create an entire line of books to bring the classic Rifts setting to Savage Worlds fans, which he says is his most challenging design project ever.

Sean now focuses on his own gaming company, Evil Beagle Games ("Bad Dog. Good Games"). Sean was the lead designer of the Freedom Squadron setting material for Savage Worlds, based on the excellent Spyglass Games' VENOM Assault cooperative board game. He co-designed, along with Len Pimentel, the top-selling _Prowlers & Paragons Ultimate Edition_ superhero RPG. He is the chief architect and developer of the OMNIVERSE, the meta-setting that interconnects all of the products EBG publishes, and he's working on multiple settings for it, including Unending War, AfterFall Legacies, Shard Warriors, and the highly-anticipated Modern Gods.

In 2021, Sean launched PORTALIS alongside Evil Beagle CEO Jennifer Shinefeld (see below), at long last turning his gifts for interactive storytelling into his full-time profession and offering truly high end experiences for gamers all over the world.

Sean is also proud to be Chair of Design Practice and Senior Fellow, Liminal Research & Education (LoRE), working with Pigeon (see below).

His Patreon, where he is shares previews and exclusive game content, can be found at www.patreon.com/SeanPatrickFannon. If you want more of his history, check out his Wikipedia article.

You can reach him directly at spf@evilbeaglegames.com