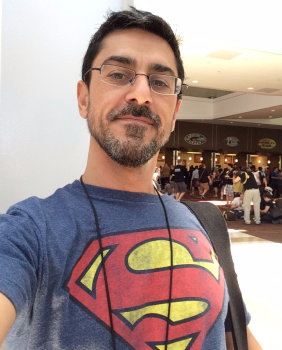 AKA “The Genius”
Creator & Senior Developer

Len Pimentel is the Brand Manager and Lead Writer/Designer for the Prowlers & Paragons game line. He has been involved with roleplaying games since the sixth grade, when he came across that fateful article in Dynamite magazine that sent him tumbling into Mr. Moldvay’s clutches.

Len has been writing and tinkering with role playing games for a long time, since 1984 in fact, when he sent the fine folks at TSR a detailed letter explaining how they could improve Jeff Grubb’s Marvel Super Heroes role playing game. Obviously, Len was way out of his league. Thankfully, Jeff and the fine folks at TSR ignored Len’s ideas and implemented their own when they created the Marvel Super Heroes Advanced Set, an incredibly influential and enduring roleplaying game that people still enjoy to this day. But hey, everyone has to start somewhere.

Len’s design and writing credits include TNT (The Narrative Toolbox), Six-Gun Fury, Magnum Fury, Hughesville High, and Paragons! He is the main creator behind EBG's core system, Prowers & Paragons Ultimate Edition. Having published exclusively through his own company, LakeSide Games, Len has joined the fine folks at Evil Beagle Games in order to accomplish more in this wonderful industry than he could on his own: stronger together.

Len hopes to one day receive a detailed letter from some kid telling him how to improve one of his games, because on that day, he will know he has arrived.