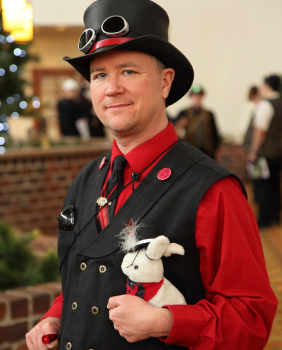 AKA “teh ebil bunneh”
Director of Production & Senior Developer

Bill has been gaming for well over 30 years, starting with the hardback Advanced Dungeons & Dragons books (which he still has, proudly showing them off to anyone foolish enough to ask) in 1980. He discovered the original Champions superhero RPG at the tender age of 11, and has been running heroic adventures ever since. People keep coming back to play, so he must be doing something right. A long-time resident of Colorado, he currently lives in Johnstown.

Bill has worked as the layout designer and art director for Hero Games (Lucha Libre Hero, The Hero System Bestiary, Hero System Martial Arts Handbook, Hero System Equipment Guide, and others), Silverback Games (Champions: The LARP), and Blackwyrm Publishing (Kazei 5, Terracide, The Fires of Heaven, 3rd World, and others). His first book, The Widening Gyre, is a world of steampunk and sorcery for Savage Worlds and the HERO System. He's written for a number of projects as well, including Torg: Eternity, Savage Rifts, and Apocalypse Prevention Inc.

Bill's current EBG projects include: The Remote is Screaming, Modrons of the Nether Plane, Jack Straw, Sea Wall, and Giupeppi's Barber Shop, plus many more. He is also the layout and graphic design master of the vast majority of Evil Beagle products. We cannot wait to announce our huge new D&D 5e setting project, for which Bill is the lead creative.

Known as "teh ebil bunneh" (for reasons we are unable to explain - as in, our lawyer advises us to say nothing further on the matter), Bill claims to have been elected President in a rigged election, conquered the Midwest, been shot and killed at least once, sworn (and achieved!) vengeance on the gods themselves, crowned himself King of the World, become the arch-enemy of a llama, deposed the Pope, and had torrid love affairs with several well-known movie starlets. It is unlikely that any of these things are actually true, but it's best to just humor him when he gets like this.